Common Credit Card Mistakes (And How To Avoid Them) 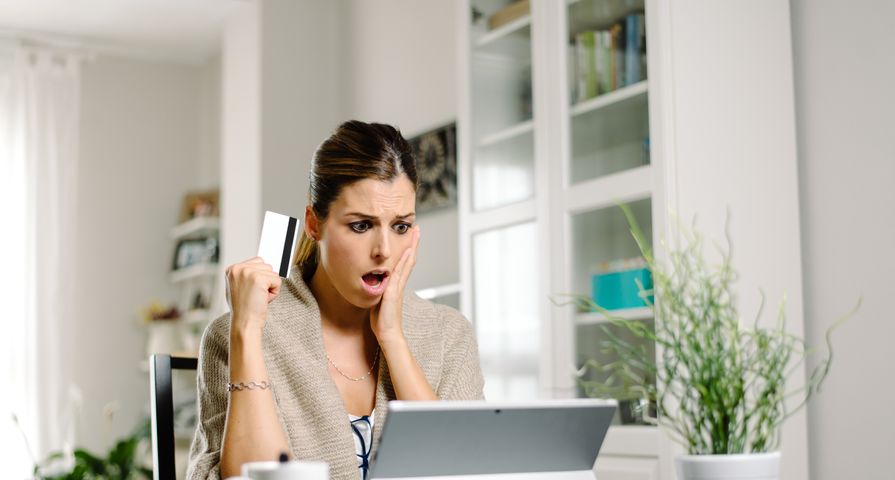 What is an APR (and How Is It Different From an Interest Rate)?

When used responsibly, credit cards can be very beneficial. However, very few people actually use credit cards properly. Too often they become the source of major financial problems. According to consumer advocacy organization Debt.org, more than 189 million Americans have at least one credit card. The average credit card holder has at least three. Many people own four or more.

On average, each household with a credit card carries nearly $8,500 in credit card debt. Total U.S. consumer debt now stands at $13.86 trillion. Clearly, credit cards are a major source of debt (and stress) for almost everyone. The good news is that knowledge is power. You can avoid the pitfalls associated with credit cards with a bit of careful planning. Here are ten common credit card mistakes that people make and how you can avoid them.

Most people know only two things about their credit card. What brand it is (Visa, MasterCard, Amex, etc.) and the spending limit. Beyond that, most people are clueless. They don’t know the exact interest rate, when monthly payments are due, how much the minimum payment is, or the penalties for missing a payment. Hint: the interest rate rises sharply.

This ignorance is one of the main ways you can get into trouble with a credit card. If you miss payments entirely or fail to cover the minimum payment, you could see your interest rate from from a standard-ish 18 or 19 percent up to the high-20s. This situation ends up snowballing until the credit card becomes a financial albatross. Do yourself a favor and take time to read the introductory information that comes with your cards. Knowing the terms that you are agreeing to is a must for every credit card owner.

Credit card reward programs are increasingly popular and complex. Financial institutions use reward programs for two reasons. First, to get you to sign-up for a credit card in the first place. After that, the rewards motivate you to use the credit card as much as possible.

Point rewards are given based on each dollar you spend on the credit card. A simple example is one point per dollar spent. However, points earned can often only be redeemed for merchandise that’s available on the credit card company’s online shopping site. It’s a nice perk, but the selection can be limited.

The takeaway here is that rewards programs are usually convoluted and restrictive. The other thing to note is that carrying a balance on your card will eat up any rewards you earn in a hurry. For example, how much money did you spend to earn enough travel reward miles to purchase a one-way airline ticket to New York City? The short answer is “a lot.” If you didn’t pay off your entire card balance every month while your earned those miles, the trip wasn’t nearly as free as you might think.

8. Maxing Out Your Credit Cards

Maxing out your credit card is a terrible idea. Once you reach the card’s limit, you risk going over that limit once interest is applied. If you find yourself over the limit, you could get hit with penalties, fees, and higher interest rates. Despite these potential problems, most Americans have maxed out their credit card at least once.

According to a study by personal finance website The Ascent, more than half of Americans reported that they have maxed out their credit cards. In fact, a total of 52% surveyed had hit their card limit. That included 50.3% of Millennials, 58.8% of Generation X, and 39.3% of Baby Boomers. This is good news for the credit card companies, but terrible for consumers.

The best advice is to pay off your credit card balance at the end of each month. Failing that, you should always maintain a cushion on the card and never hit the limit. Once on the precipice of a credit card limit, there’s nowhere left to go but down.

7. Raising your limit higher and higher

This mistake follows the previous one. If you reach the limit on your credit card, the temptation is to just raise that limit. The bank will probably allow it too, as long as you continue to make the minimum payments.  The problem is that this leads you further into debt.

If you hit the old limit on your card, it’s highly likely that you’ll do the same with the new limit. First you owed $10,000. Then $15,000. Now $20,000. Raising the limit on a credit card usually increases the amount of debt you end up having to pay off. That’s not a good thing, obviously.

Another incentive used by credit card companies is the “low introductory rate.” This is when the interest rate charged is extremely low for a specified period. It usually lasts for six months or a year. Some credit cards even offer 0% interest as an introductory rate. This acts as both an incentive to get people to sign up and also transfer balances from other credit cards over to the one that’s charging no interest.

The problem is that the introductory rate eventually ends. Then a much higher rate is applied – often without the owner of the credit card realizing it. You can suddenly go from paying no interest to paying 21% or higher. It’s a trap that many people fall into. The lure of a low interest rate is too good to resist.

However, after using a credit card for months, the hens come home to roost. Suddenly that balance transfer you swore would be paid off is getting hit with massive interest rates again. As a rule, cheap introductory rates are best avoided unless you have the discipline (and income) to actually benefit from them.

You’d be better off taking out a credit card that provides an interest rate that is consistently lower than the average of 18% to 26%. Some credit cards, for example, offer interest rates of 10% to 14%. Seek out those cards and avoid the enticement of 0% interest. The fine print always reads “…for a limited time only.”

Cash advances are a killer. The reason they are so bad is that the interest charged on them is usually much higher than the interest applied to regular purchases. Use your credit card to buy something at Walmart, for example, and you’ll be charged the standard interest rate of 18%. However, if you take out $100 in cash from your credit limit, you’ll probably incur interest of 28% or more. Also, any special interest-rate promotions on the credit card, such as no interest for a year, typically don’t apply to cash advances.

If that weren’t bad enough, credit card companies also charge a transaction fee of 2% to 4% on cash advances. Interest on cash advances usually starts accruing from the moment you take out the money. There is no grace period as there is with regular purchases. Lastly, cash advances don’t typically qualify for any rewards the card offers. Any way you look at it, taking money off your credit card in the form of cash is a bad idea.

You’ll never get very far only making the minimum monthly payment on a credit card. The minimum payment is usually not even enough to cover the interest charged on the balance. While most cards only require you to make a minimum payment each month — usually a fixed amount of $20 to $25, or a small percentage of your balance — paying the minimum is never advisable.

Personal finance website NerdWallet crunched the numbers. They assumed a credit card debt of $6,000 and a relatively low interest rate of 14.99%. If you made the minimum payment for a year on this fictional card, you would rack up $4,064 in interest charges, pushing the total debt to over $10,000. Do yourself a favor and pay off your credit card in full each month. If that’s not possible, at least make enough of a payment that you’re more than covering the interest charges. Even small progress is better than no progress.

3. Owning Too Many Credit Cards

We have raised this issue before, but one of the biggest mistakes you can make is owning too many credit cards. One credit card is usually enough. More than that is typically inadvisable. Yet, according to a study by Gallup Inc., the average American adult owns three credit cards. Consider that nearly 30% of Americans don’t own any credit cards at all and you can see that it’s possible to get through life without one.

If you must have a credit card, do yourself a favor and only choose one one. Our best advice is to have one credit card that has a low limit of $5,000 to $10,000. If possible, only use the credit card for emergencies. Pay the balance off in full each month and avoid the interest charges. Carrying balances on multiple credit cards at the same time makes it extremely difficult to keep track of your debt, let alone pay it off. One card, and one card only, is the safest bet.

Contrary to their advertising, credit card companies do not have your best interests at heart. They are very unforgiving if you miss a scheduled payment. If you fail to make a payment on time, you’ll quickly see your interest rate jump higher. You’ll probably also incur penalty fees. So called “late fees” can be as high as $40 each time.

The combination of higher interest and penalties can make it extra difficult to manage your credit cards and pay them off. Other consequences of missing a scheduled payment include the loss of any promotional or introductory interest rate on your credit card, cancellation of your rewards program, and a black mark on your credit report. The whole situation is a nightmare and should be avoided at all costs. Essentially, if you miss a scheduled payment on your card, a red flag is raised by the provider. Then the punishments are piled on until you’re so sorry you missed a payment that you vow never to do it again. Not worth it.

What you do with a credit card is important. Do you use it only for emergencies? Are you using it to earn travel rewards and take a vacation? Is it used to purchase Christmas gifts? How ever you use your card, one of the things you want to avoid is buying big ticket items with it. By this we mean appliances, furniture, and, God forbid, a car.

Putting expensive items on your credit card is a surefire way to run up the balance, increase the interest charges, reach your limit, and be unable to make the minimum monthly payment. Using your credit card to make a series of smaller, more affordable purchases that can be paid off at month’s end is the better approach. Too many people spend freely with their credit card on large purchases only to regret it later. It’s best to save and pay for items like that new big screen TV or replacement dishwasher with cash. Then you can forgo the extra debt altogether. Using your credit card for these types of big-ticket purchases, without the ability to pay off the charges right away, should be considered a huge no-no.