Home » Budgeting » How Much Should You Tip? An Etiquette Guide

How Much Should You Tip? An Etiquette Guide 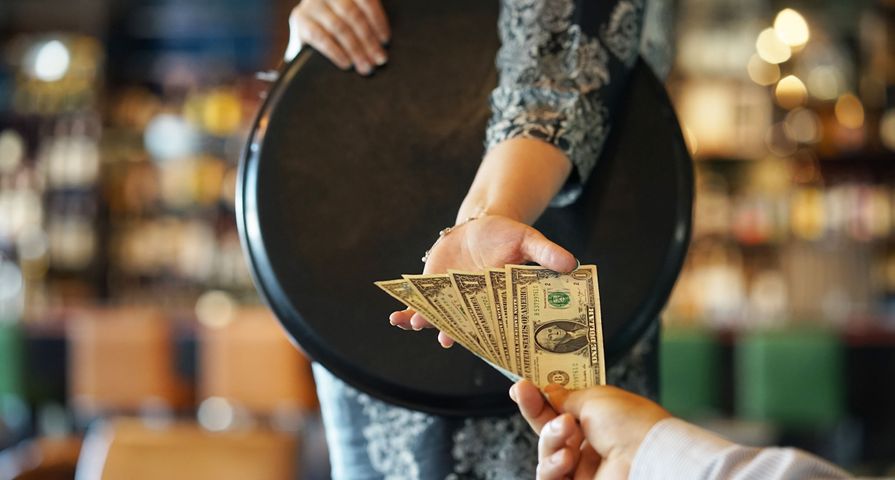 How to Handle Awkward Money Moments

When it comes to monetary customs, tipping has to be one of the most confounding of all. The practice of giving a gratuity or tip originated in Tudor England (1485-1603). There, overnight guests in private homes were expected to provide a sum of money to the host’s servants. Since then, tipping has become a widely-adopted practice in many countries. There are also region-specific customs to go along with it. In North America (and particularly the United States), tipping has evolved far beyond being something extra you give for great service.

Thanks in large part to stagnant wages, many service-industry workers depend on gratuities for a significant portion of their income. While it can be infuriating to realize we live in an economic system in which worker salaries are essentially crowdfunded, tipping is still ingrained as an essential practice in the American psyche. No matter your opinion on the economic forces that drive it, tipping is something you just have to put up with.

Not knowing how much to tip (or if you even should) in a given situation can cause plenty of anxiety. So, here’s a simple etiquette guide for navigating the confusing world of gratuities.

It’s common knowledge that when you eat at a dine-in restaurant, you tip your server. However, even though it’s a transaction most of us have done many times, tipping servers can still cause some anxiety. In fact, even experts can’t seem to agree on what the tipping range should be!

Robin DiPietro, a professor at the University of South Carolina’s College of Hospitality, Retail and Sport Management recommends tipping between 15 percent of the pretax amount (for average service) and 20 percent (for great service). However, Eater NY chief critic Ryan Sutton disagrees. According to Sutton, 20 percent is the minimum you should tip at a restaurant.

While opinions vary, we think that tipping 20 percent for bad service is a hard thing to recommend. Stick between 15 and 20 percent. However, you should push the amount up if you receive really great service.

Many coffee shops and take-out counters now have tip jars or options for adding tips on their debit machines. That implies that gratuity is expected. While it’s easy to get coerced into leaving a tip by such prompts, you’re not doing anything wrong if you decide not to. According to The Emily Post Institute, a leading authority on social etiquette, tips aren’t necessary at these establishments. The reasoning is that they don’t provide a high level of service. They don’t seat you or bring your food to your table. However, there are some situations you might want to consider tipping. If you’re a regular or the barista provides especially great service, leaving a small tip is a nice gesture.

If you’re just out for drinks, ditch the percentage game and just go for flat rates. Generally, $1 for a beer and $2 for a cocktail is the going rate. Feel free to go higher if you’re feeling generous. It might make your bartender more attentive and ensure your glass is never empty. Just remember to leave between 15 and 20 percent if you decide to order food!

Delivery apps are abundant these days. Typically, they let you add a tip as part of your order. However, if you have cash on hand, you may want to consider giving the delivery driver a cash tip instead. The built in tip is taxable income for them, but the cash tip might not be. That’s on them. But they probably appreciate the cash more simply pressing the 18% button on your app. As for the amount, stick to the dine-in range of 15-to-20% or $3-to-$5 — whichever is higher.

When picking up food from a restaurant, a maximum tip of 10% will do.

Emily Post recommends leaving your hotel housekeeper $2-to-$5 per day in a clearly-marked envelope. This ensures that the person who actually cleaned your room gets the tip. The amount you leave is dependent on a couple of things. First, what is the quality level of the hotel? Leave more if you’re staying in a five-star joint. The second question is how much of a mess did you leave? If you simply slept in the room after a long day of business meetings, you can leave a bit less. If you went on a bender with your drinking buddies and the room is trashed, leave a little more.

If you enlist the aid of a concierge during a hotel stay, it’s customary to leave a tip upon checking out. However, the size of the tip — and whether you should leave one at all — is dependent on a variety of factors. For instance, some hotels charge a “service fee.” Part of that may go to paying the concierge. If this is the case, it’s a good idea to ask what the fee covers specifically.

If your concierge assists you with a small task, a tip of $5 to $10 is sufficient. However, if they go out of their way to help with a bigger task (like arranging a birthday surprise to be delivered to your room), a tip of $20 or more is called for. Use your best judgment. However, don’t feel like you need to leave a tip if your only interaction is to ask for directions.

Tipping taxi and rideshare drivers follows a similar line as restaurant servers. You’ll want to tip about 15 to 20 percent per taxi ride. The same amount can be applied to services like Uber and Lyft. Speaking of rideshares, Uber and Lyft drivers are entitled to 100% of tips they receive within the app. So feel free to leave a tip this way if you don’t have cash.

Full service gas stations have largely gone the way of the dodo. However, there are still a few scattered across Canada and the U.S. If you ever find yourself in the situation where an attendant fills your gas tank for you, tips aren’t expected. However, if you’re feeling generous, there’s no harm in kicking a couple bucks over. After all, you may never get another chance to do it!

There’s no requirement to tip tow truck drivers, but it is strongly encouraged. For smaller services such as a jumpstart or tire change, $5 is a good amount. Kick it up to a maximum of $10 if they tow your vehicle.

A customary 15-to-20 percent is the going standard for a haircut or mani/pedi. However, you should push the amount to the high-end of this range depending on the level of service. For example, a hairstylist who provides a hair wash and scalp massage should receive a larger gratuity than one who just chops hair.

You and your sitter will likely have agreed to an hourly rate for their services. Therefore, frequent tips aren’t really necessary. Instead, if they frequently child-sit for you, give them a bonus equivalent to one or two weeks’ pay at the end of the year.

There are many service professions that may seem open to gratuities, but either don’t require them or are strictly prohibited from receiving them. These include (but certainly aren’t limited to) the following.

What Should I Do If I Receive Bad Service?

This is the big, tough question. If you’re dissatisfied with the level of service provided by a server or feel like your hairdresser could have done a better job, speak up. Just try to be polite. While it can be tempting to leave out a tip altogether as a way of showing your displeasure, it’s definitely a social faux pas. Everyone makes mistakes, so it’s important to take the whole situation into consideration instead of getting rude.

That being said, subpar service calls for a subpar tip. So leaving 10% or less is a good way to get the message across. Leaving no tip might actually be worse, since your server will simply think you’re cheap. Leaving a 10 percent tip sends a message (without drastically hurting their income).

What If My Tip is Refused?

There are some situations where people can’t or won’t accept tips (for example, cashiers). That means you’ll have to show your gratitude in a different way. Instead of cash, a simple “Thank You” will often suffice. You should consider speaking to the server’s manager too, if you can make the time. Positive feedback goes a long way in the customer service field. So pay it forward and let management know when their staff are doing a great job.

Do Tipping Practices Differ By State?

Yes! In fact, the data may surprise you.

According to a 2017 study from Square that measured credit and debit card transactions from over two million vendors, people in states that tend to vote for Republican candidates leave bigger tips on average than those in Democratic states. However, because the analysis doesn’t measure how individual voters and tippers behave, it’s not clear whether Republican voters tip better than Democratic voters on an individual basis.

The study found that Hawaii had the lowest tip average of any state with just 14.8% of the check. Meanwhile, Idaho had the highest average tip with 17.4%. For context, the national average was a respectable 16.4%.

The above recommendations should serve as a guide, rather than hard and fast rules for how to tip. When you strip away all the messiness of employers using gratuity charges to keep costs down and avoid paying their workers living wages, tipping is really about expressing gratitude for a job well done. Be generous when you can and remember to treat anyone who serves you with respect and dignity!