Home » Taxes » How Getting Married Will Impact Your Taxes

How Getting Married Will Impact Your Taxes 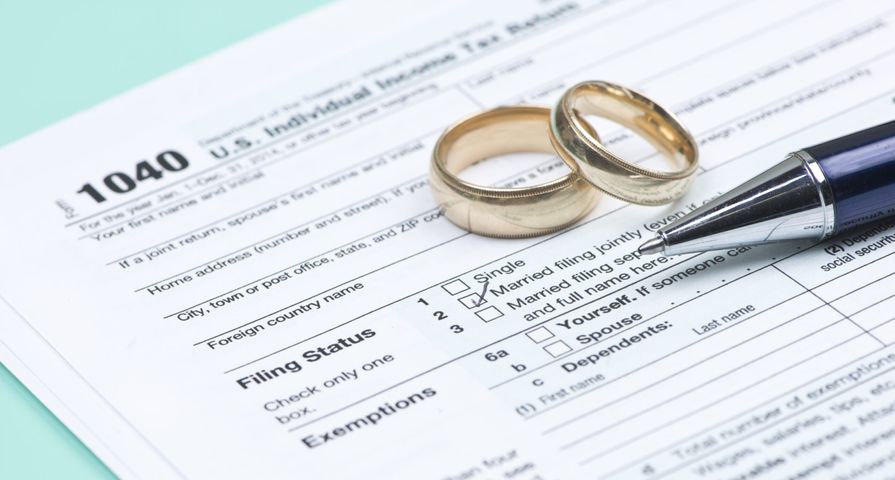 There are many things to consider when getting married – love, family, taxes.

Yes, that’s right, taxes. Believe it or not, exactly when you choose to get married can impact the taxes you pay to Uncle Sam. It’s important to understand the impact marriage has on your taxes. The last thing you want is a huge and unexpected bill from the IRS. What a rude interruption to your newlywed bliss! Depending on how much you and your spouse earn, you will either receive a “marriage bonus” or a “marriage penalty” once you tie the knot.

Here we breakdown what you need to know about matrimony and taxes.

The main reason why marriage impacts your taxes is because you and your spouse combine your incomes and start to use wider tax brackets. This results in most couples getting a “marriage bonus.” That means you’ll pay less in overall taxes once your incomes are combined. This is more common when partners earn differing amounts of money. Typically, the lower-earning spouse pulls the higher-earning spouse’s income down into a lower income tax bracket. This can also apply if only one person in the marriage is earning an income.

However, some couples do receive a “marriage penalty.” This happens if their combined incomes push their total household income into a higher tax bracket. The end result is you’ll owe more in taxes. This usually happens if both spouses earn a similar income.

The 2017 Tax Cuts and Jobs Act did make the marriage penalty less severe for all but earners in the top (37%) tax bracket. For the record, that top bracket is for households with a combined income of $622,051 or higher. However, it’s still possible to pay more in taxes as a married couple if your incomes are similar amounts.

An analysis from the Tax Foundation found that marriage bonuses can go up to 21% of your combined income. On the other end of the calculation, marriage penalties usually max out at 12%.

Married For The Whole Year

As far as the IRS is concerned, you and your betrothed are married for the entire tax year in which you tie the knot. Even if you are married in December. That’s important information when you file to know come tax time. Your marital status for the entire tax year depends on your status as of December 31. This rule can catch some couples by surprise, if they assume otherwise. You don’t want to end up owing more in taxes because you didn’t file properly after your wedding. Should you qualify for the marriage bonus though, this rule works in your favor. You get a bonus for the entire tax year regardless of what month you got married.

As you can see, the timing of when you get married is very important. Especially if you think you’ll be hit with a marriage penalty once your union is official. If, for example, you fall under the marriage penalty umbrella, you might want to plan your wedding early in the year. A wedding in January of 2021, for example, wouldn’t affect filing your 2020 taxes. It would also give you a whole year to prepare for the extra tax bill.

On the flip side, if you are getting a tax bonus you can marry earlier to take advantage. For example, you could move your January 2021 wedding to December 2020. That would squeeze in an extra year of tax savings and benefits.

Once married, you and your spouse will have to decide if it’s more advantageous for you to file joint or separate tax returns. In most cases, a joint filing is the best option. Filing separately can result in a much higher combined tax bill, plus the loss of many tax benefits. However, there are a few instances where it may be better to file your taxes separately.

For example, if one partner has very high un-reimbursed medical expenses or if one (or both) of you have an income-driven repayment plan for your student loans. In those cases, filing separately may make sense. The important thing is to fully understand your financial picture before filing your tax returns. If you have a complicated financial situation, or are just feeling overwhelmed by all the numbers, seek the help of  tax professional.

The Bottom Line On Marriage And Taxes

Getting married is expensive for several reasons. Venues, dresses, catering, and photographers all add up. The average wedding costs plenty of money. Taxes can be a sneaky added expense. While nobody should get married solely based on their tax situation, it’s still important to know how combining your incomes will impact their taxes.

Hopefully, you’ll receive that marriage bonus after walking down the aisle. However, you should know that receiving a marriage penalty is also possible. So be prepared for it. Knowing how your wedding and ensuing marriage will impact your finances (beyond the money you spend on the event itself) will help you and your spouse get your new life together off to the best possible start.